Caffeine: do you need to cycle it’s intake ?

This is how caffeine boosts sport performance

One of the main mechanisms, through which caffeine improves sport performance is through its’ effects on adenosine receptors. The more adenosine binds to its receptors, signalling the brain to calm down and get tired. The chemical structure of caffeine is very similiar to Adenosine, which is why caffeine can bind to adenosine receptors and thereby counteracting the tiring and lethargic feeling. Caffeine has also been shown to improve pain tolerance and improve the subjective feeling of exhaustion during exercise (1). 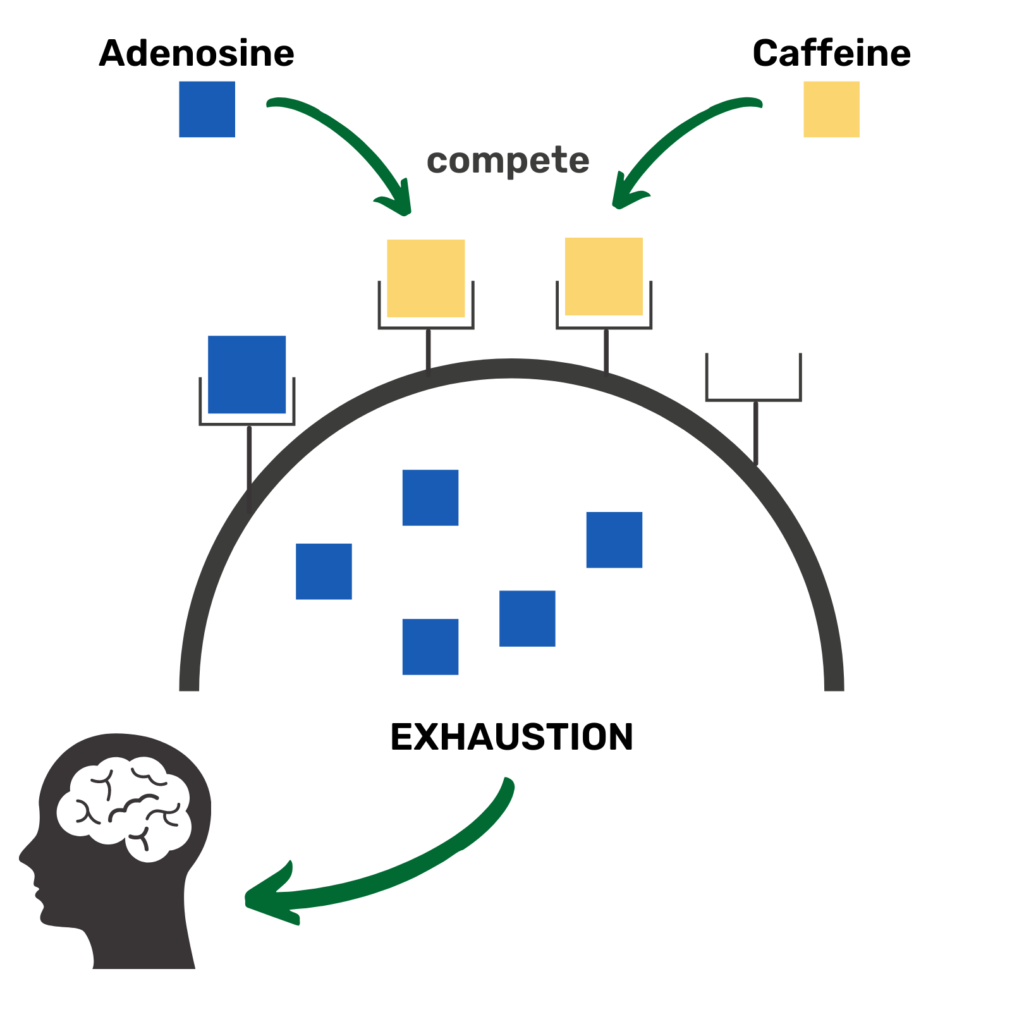 Adenosine and caffeine compete for the same adenosine receptors. The more adenosine molecules pass the brain barrier the more tired we feel.

Theory of attenuated effect of caffeine by daily coffee consumption

Studies in animals have shown that continuous intake of caffeine results in an increased concentration of adenosine receptor (2). In theory, this would result into having a dulled effect of caffeine, meaning you would have to increase your caffeine intake to experience the same performance improvements.

The question is: can this observed effect in animals be transferred to humans, more specifically athletes?

What is so special about this study ?

This study used a cross-over design which means, that all participants did the initial cycling performance test once with caffeine and once consuming a placebo without knowing the condition. This eliminates the possibility of different caffeine sensitivity to affect the measured outcome. In the second half of the experiment, the participants either consumed a placebo or 3 mg of caffeine per kg bw daily (~ 2 large coffee) for a duration of 3 weeks.

After 3 weeks, the same cycling performance test was repeated with athletes taking an acute caffeine dosage one hour before the workout. If only the placebo group would see an improved performance, this would strongly support the hypothesis that taking caffeine on a daily basis would attenuate its performance enhancing effects.

In the initial performance test, the consumption of caffeine was associated with a significant performance boosting effect. However, after three weeks this effect was no longer apparent in the group which consumed caffeine daily, whereas the placebo group was still benefiting from the effect of caffeine just like in the initial cycling test.

So yes, based on this study, the daily consumption of caffeine might attenuate its performance enhancing effects.

Is this one study telling the whole story ?

While the above mentioned study does suggest, athletes need indeed to cycle their caffeine intake if their aim is to benefit from its ergogenic properties, there are multiple studies that caffeine still works just as good for athletes who drink coffee daily  (4, 5, 6, 7, 8).

However, in most of these studies athletes were simply allocated into an habitual caffeine drinking group or into a no caffeine/low caffeine group. This means that the athletes were aware about the fact that they were in the experimental group and were somewhat expected to perform better. This bias is well known to influence the performance of participants and is why researchers try to blind participants

Hence, based on this and the other cited studies (4, 5, 6, 7, 8), consuming caffeine daily does not mean that athletes can no longer benefit from it’s positive effect on sport performance.

What does that mean for the athlete ?

Some suggest, that refraining from caffeine for just a few days before competition is the best middle-ground strategy…..

Do athletes benefit from short-term withdrawal ?

The short answer is: no, there is no benefit it 2-4 day caffeine withdrawal. Both studies (9, 10) that tested this hypothesis observed no benefit of strategy.

How we use the data in our coaching

At this moment, we can not clearly answer the question of a potential habituation effect with YES or NO.

However, we can clearly say that if drinking coffee daily would have attenuate the effect of acute caffeine intake on performance, the damped effect will be very small. Otherwise, not that many studies (4, 5, 6, 7, 8) would have shown that caffeine can still improve performance in daily coffee drinkers.

We advise our athletes to consume no more than 2 cups of coffee per day anyways. Mainly, because of it’s negative effects on sleep latency and sleep quality (11).

We don’t use caffeine with all our athletes, not also not on  daily basis. Instead, we advise to take it before key training sessions and during competitions only. This decision process is customised to every single athlete, their training schedule, competition level etc. For example, we also know that some people are much more sensitive to caffeine to others. All these aspects must be taken into account.

Finally, we only hand out recommendations. In the end, we want every athlete to make their own decision for themselves, but we make sure to have presented all available pros and cons beforehand.

Did you enjoy this article? Then why not share it with your friends and fellow athletes and coaches.

Many thanks, your team athlEATcoach